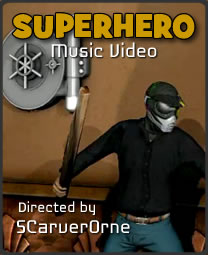 On July 1, 2012 PSTalent announced a video contest sponsored by PSTalent, LOOT, Sony Creative Software, and music artist Tim McMorris. This Machinima video used only the song “Super Hero” by Tim McMorris, and was filmed entirely using the LOOT active camera and the LOOT studio stage set camera, and edited using Sony Vegas. This is the video I directed, edited, and submitted.

“Really impressed by this. It’s incredibly well organized and directed, and hits all the important beats of a superhero story. I’d like to see what else can be done with this character, as the director definitely “gets” superheroes.”
– Ryan Collins, Marvel Entertainment

“This was a great video submission. I love it!”
– Cynella Cyn, PS Home Gazette