Palm Springs, March 4th, 2015 – Today, PSTalent Entertainment announced that its founder and CEO Levi Vincent is to be recognized by SBEMP as the winner of its Entrepreneur Award at the Inaugural SBEMP Awards on March 5th at Colony 29 in Palm Springs. Fresh, innovative and successful local companies will be rewarded for their community contributions to the Coachella Valley through this new business awards program, sponsored by SBEMP, a firm that works closely with many business ventures. 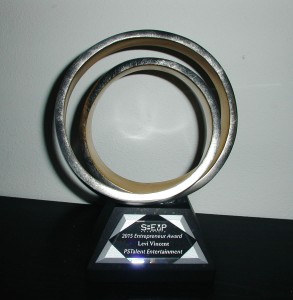 Levi Vincent launched PSTalent in 2009, producing short story animated films that caught the eye of Sony executives and led to the signing of Levi’s newly formed production company; PSTalent.com. Under Levi’s leadership, his team produced popular PlayStation® filmed entertainment, including titles such as The Castle, The Spotlight, and The PSTalent Variety Show, all while casting members from the PlayStation® community as the digital characters in its films. This unique business model quickly catapulted PSTalent into one of the most popular brand names on the PlayStation® Home platform.

In 2012, Sony named PSTalent as the “first community-born developer”, issuing the company a PlayStation® developer’s license, allowing PSTalent to develop and publish virtual merchandise. The company introduced the Shadows Collection as its first release – a four-piece mafia-themed wardrobe collection to be used in the storyline of its future films. 2013 was an exciting year for Levi, being awarded by Sony the PSTalent Movie Theater, an in-game 3D interactive movie theater broadcasting PSTalent entertainment to millions of PlayStation fans throughout the world. Additionally, a division of Sony Pictures launched the PSTalent Movie Channel on the PlayStation® Home platform, providing on- demand access to the library of PSTalent presented films.

“From the time PSTalent was created, to this very moment, Levi has cultivated a very influential community,” said Nicole Si, casting director and actor at PSTalent. “He has inspired many to express their creativity through talents they never thought they had, such as directing, voice acting, writing, and then showcases their work on the PSTalent big screen in a true Hollywood-like premiere where hundreds attend. For that, Levi is one of the most popular and well respected individuals in the world of PlayStation® and I know the many people he has touched will agree that nobody deserves this award more than Levi.”

PSTALENT Entertainment is a licensed PlayStation®Publisher and develops downloadable digital merchandise to further enhance a gamer’s virtual world experience. The company produces exclusive video entertainment for the SONY PlayStation®Network, casting members from PlayStation®HOME, a 3-D virtual world where over 31 million gamers puppeteer a personal avatar to socialize, play games and star in PSTALENT movies. All PSTALENT merchandise, including avatar wardrobes, props and mini-games are available for purchase on the PlayStation®Network.

SBEMP LLP was founded in 1994. The founding members were partners in the largest law firm in the Inland Empire, each with over fifteen years of experience and a proven track record of substantial success. They formed their own firm to concentrate exclusively on providing clients with superior legal representation and first-class service at competitive pricing. The firm has continued that success and built a strong reputation in both complex litigation and transactional matters.
###